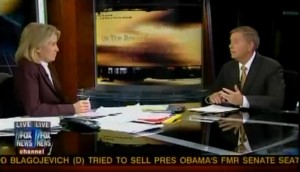 Senator Lindsey Graham visited On The Record last night to chat with Greta Van Susteren about some “novel ideas” he has for improving the country. His best one? Changing the 14th Amendment to eliminate birthright citizenship and punish children of illegal immigrants who were born on US soil. Novel indeed!

After saying he wants to fix the “broken border” and create larger temporary employment programs “so people can work here, earn a living, and go back home after a couple of years,” Graham went on to declare:

“I would like to deal with the 12 million [illegal immigrants currently in the US] firmly and fairly – you can’t stay here on your own terms, you have to learn English, you have to pay fines, you have to get in the back of the line if you want to be a citizen – but I may introduce a Constitutional Amendment that changes the rules if you have a child here. Birthright citizenship I think is a mistake, that we should change our Constitution and say, ‘If you come here illegally and you have a child, that child is automatically not a citizen.'”

Greta informs him that he would be faced with a lot of opposition if he actually proposed this change to the 14th Amendment, and asks how likely it is that he would actually go through with it. He doesn’t answer her, and instead goes into a conspiracy theory he terms “The Drop and Leave” about Mexican mothers sneaking across the border to plant their offspring in American soil. Then he logically follows with talk about guns and drugs.

The only thing more annoying than his proposal is the fact that he pronounces “why” with an audible H (at the 1:00 mark when Greta is politely calling him stupid). Watch below: