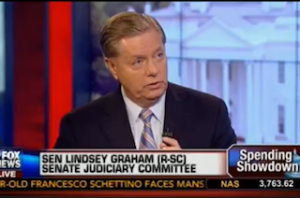 Senator Lindsey Graham (R-SC) summed up the Republican objection to President Obama’s Affordable Care Act in three little words Monday morning: “This bill sucks.” It may not have been the most nuanced assessment, but it demonstrated just how strongly many in the GOP feel that Obamacare has to go.

Graham’s comment came during an interview with Fox News’ Bill Hemmer about the Senate debate over a bill passed by the House last week that would fund the government through the end of the year while simultaneously defunding Obamacare. The senator got in a quick dig at his colleague Sen. Ted Cruz (R-TX), saying, “I can’t imagine filibustering a bill that I like from the House.”

He predicted that the Democratic majority in the Senate will strip the “defund Obamacare” part of the House bill from the legislation, but also suggested that this could help the GOP in the 2014 midterm elections. “That will be the defining issue in 2014,” Graham said. “This is an albatross around their neck. Obamacare is going over like a lead balloon in the economy.”

As Hemmer read off parts of the law that have already been delayed, Graham said, “This bill sucks.” Hemmer was apparently taken aback by the language, saying, “Sorry?”

“This bill sucks,” Graham repeated, incorrectly using the term for legislation that has not yet become law. “It really does. It is really an albatross around our Democratic friends. And they will slowly but surely, if we don’t screw this thing up, come to use, because it is more than they can carry in the election cycle in 2014 and 2016.”