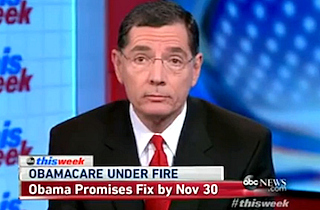 “I think she should stay, and I think she will get the job done,” Manchin said. “We’ve gotta move forward. If you want to kill the program, and you start making all these changes, that would kill the program. All we’re asking for is don’t have the fine go into place, get market-driven products, make sure you can entice, through incentives, young people that are healthy. We are a consumer nation, we are great entrepreneurs. We can make this happen, but we have to be on the same team, and that is Team America.”

Barrasso agreed with Manchin that a congressionally-authorized delay would be a good idea, but added that the website problems were only “the tip of the iceberg” of Obamacare’s problems.

“You have to work through this,” Manchin stressed. “The transition period of one year, is very reasonable and doable, and the fines don’t go into effect until 2015. We’re still working through it. If you delay it, you’re never going to identify the problems and work them out…We can’t go back to the old system.”