Sen. Marco Rubio’s Reaction To Obama Immigration Measure: ‘Why Wouldn’t Someone Call Me?’ 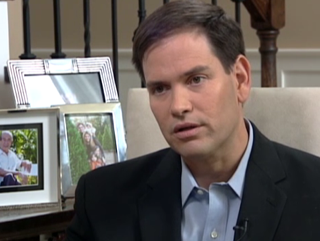 In his first interview since President Obama announced a change in immigration policy that in many ways resembled a bill he was drafting to introduce to the Senate, Florida Senator Marco Rubio told ABC News on Friday that he was surprised by the news and, while happy to hear that some young folks would benefit from it, indignant at the White House for the way they went about it. “If they were serious about a real solution to this problem,” he told ABC NEws’ David Muir, “why not reach out to people?”

Sen. Rubio told Muir that he wasn’t opposed to the idea of helping the “group of kids in this country who are undocumented who, through no fault of their own, are undocumented.” What he opposed was the executive order, which made it clear to him that it was an act for political gain. “By doing this by executive order,” Sen. Rubio argued, “by ignoring and going around the Congress… this may make it harder in the longer term to solve this problem.”

Sen. Rubio also noted that he expected the White House, had they been planning this in good faith, to work with Congress. “The White House never called us about this, no one reached out to us and told us it was on its way,” he said, “If they were serious about a real solution to this problem… why not reach out to people?”

The senator then accused the President, as he has done in the past, of “deliberately [dividing] Americans against each other for purposes of political gain,” something he described as “common in politics,” but but nonetheless dismaying.

The full interview is set to air tonight on ABC News. Below a segment from Muir’s talk with the senator: