Sen. McCain Defends NSA To Crowley: We Wouldn’t Be Arguing ‘If This Was September 12, 2001’
video

Sen. McCain Defends NSA To Crowley: We Wouldn’t Be Arguing ‘If This Was September 12, 2001’ 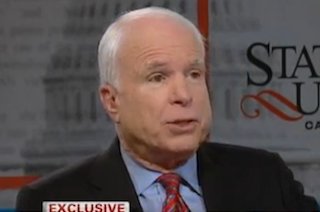 Arizona Senator John McCain consistently defended the government’s surveillance programs to a skeptical Candy Crowley on State of the Union Sunday morning. Conceding that there has been some government overreach, McCain nonetheless upheld the necessity of the programs for preventing terrorist attacks.

“I don’t claim to defend everything that the government is doing,” McCain said. “But I am saying that the threat is growing, not diminishing, in my view.”

Crowley continually pressed McCain as to whether he felt the various surveillance programs revealed this week struck the proper balance between privacy and security.

“There have been criticism on the part of people like me about us not doing enough,” McCain said. “The Boston bombers obviously were communicating with people…Mr. Al-Awaki was recruiting people through the internet, and possibly through phone calls back and forth to America.”

McCain also defended the oversight of the programs.

“I believe that the FISA is an appropriate way of reviewing some of these policies. You pointed out thart almost none of the proposals of the administration had been turned down by the FISA court. That’s either because they’ve made a strong enough case, or because the FISA court is a rubber stamp.”

“Which is it?” Crowley pressed.

“I’m not entirely sure,” McCain admitted. “But I do believe that if this was September 12, 2001, we might not be having the argument that we’re having today.”

McCain maintained that intelligence committee oversight was enough to keep the programs in check, and that comprehensive congressional knowledge was unnecessary.

“I don’t think that 535 members of Congress shoud be briefed on every program that our government is engaged in,” he said. “Thats why we have intelligence committees.”

“I think it’s entirely appropriate that we have congressional review, executive review, and that we take the case to the American people to some degree as to what we are doing,” McCain said, though he added that too much transparency would educate terrorists on our tactics. “We oughta be careful that we’re not discussing practices that we employ that would help the enemy evade our deception and apprehension.”