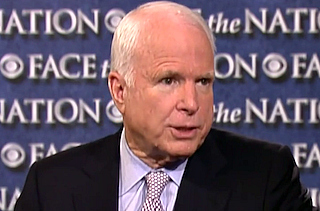 Arizona Senator John McCain appeared on Face the Nation Sunday morning and called for a more detailed and aggressive military strategy for the U.S.’s intervention in Syria, including the proposed removal of Syrian President Bashar al-Assad from power—but also warned his colleagues in Congress of the “very, very serious” effects of overriding President Barack Obama’s decision to engage Syria.

“We’re in a bit of a dilemma here, because I think Senator Lindsey Graham and I and others will be wanting a strategy, a plan, rather than just, ‘We’re going to launch some cruise missiles and that’s it,'” McCain said. “We even worry more when the president’s Chairman of the Joint Chiefs says, ‘Well it doesn’t matter when we strike.’ Well, that’s not a military action, then. That’s a symbolic action.”

“So we need to have a strategy and a plan, and that plan in our view, the best way to eliminate the threat of Bashar al-Assad’s continued use of chemical weapons—and by the way, we know he’s used them a number of times before—would be the threat of his removal from power. And that, I believe, has to be part of what we tell the American people.”

McCain cautioned that he was not rejecting the authorization resolution.

“The consequences of the Congress of the United States overriding a decision of the President of the United States of this magnitude are really very, very serious,” he said. “And already we’re sending a bad signal to Iran, to North Korea, to Bashar al-Assad. But if we overrode the president’s decision, and did nothing?” McCain let the question hang.