Sen. McCain: Russia is a ‘Gas Station Masquerading as a Country’ 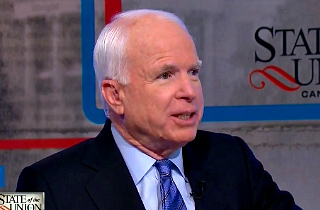 Senator John McCain (R-AZ) returned from a trip to Ukraine and told State of the Union host Candy Crowley Sunday morning that the United States needed to target Russia’s role as a gas provider to European nations in order to weaken its leverage in Ukraine and elsewhere.

“The United States of America, first of all, has to have a fundamental re-assessment of our relationship with Vladimir Putin,” McCain said.
“No more reset buttons, no more ‘Tell Vladimir I’ll be more flexible.’ Treat him for what he is. That does not mean re-ignition of the Cold War. But it does mean treating him in the way that we understand an individual who believes in restoring the old Russian empire.”

“Look, Russia is a gas station masquerading as a country,” McCain said. “It’s kleptocracy, it’s corruption. It’s a nation that’s really only dependent upon oil and gas for their economy. And so economic sanctions are important. Get some military assistance to Ukrainians, at least so they can defend themselves. Resume the missile defense system in Poland and the Czech Republic. Look at Moldova and Georgia, both of whom are occupied by Russian troops as we speak, a path toward membership in NATO.”

“There’s a myriad of steps that we can take, and it will be interesting to see to what degree our European friends will join us who are dependent on Russian energy supplies,” McCain said.