Sen. McCain Tears Into Rand Paul’s ‘Totally Unfounded’ Filibuster: ‘A Disservice To A Lot Of Americans’ 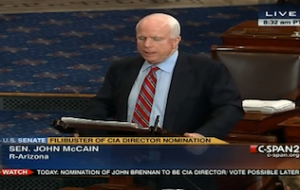 Sen. John McCain took the Senate floor on Thursday afternoon to respond to Sen. Rand Paul‘s filibuster about drones — and made it abundantly clear that he does not in fact “stand with Rand.” Reading from the critical Wall Street Journal editorial urging Paul to “calm down,” McCain tore into Paul’s arguments.

“I saw colleagues who know better come to the floor and voice some of this same concern, which is totally unfounded,” McCain asserted, pointing to Paul’s Jane Fonda hypothetical, deeming it ridiculous. To “somehow say that someone who disagrees with American policy and even may demonstrate against it is somehow a member of an organization which makes that individual an enemy combatant is simply false,” he added.

“I don’t think we should have any doubt that there are people, both within the United States of America and outside of it, who are members of terrorist organizations that want to repeat 9/11,” McCain continued — but “to somehow allege or infer that the president of the United States is going to kill somebody like Jane Fonda, or somebody who disagrees with the policies, is a stretch of imagination which is, frankly, ridiculous.”

The drone program does merit further discussion, debate, and likely more legislation, the senator said. But Paul’s arguments were wrong, he argued, referring specifically to Paul’s oft-cited example of a drone strike while someone’s sitting at a café.

It’s a “disservice to a lot of Americans for by making them believe that somehow they’re in danger from their government,” he charged. “They’re not.”

He went on to contend that we are in danger, but that danger is from the enemy “hellbent on our destruction.” Bringing up Anwar al-Awlaki, McCain said he should not have been protected anywhere in the world.

“I don’t think that what happened yesterday is helpful to the American people,” McCain pressed. While we do need to discuss our state of “almost interminable warfare.” But Paul’s filibuster brought a serious discussion into the “realm of the ridiculous.”