Sen. McCaskill On Lack Of GOP Support: Mitch McConnell Figures Out What Amendments Can ‘Make My Life Miserable’ 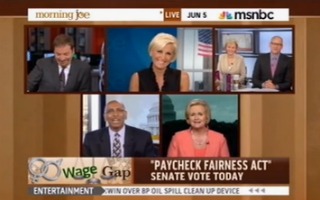 On Tuesday, Morning Joe host Mika Brzezinski invited Missouri Senator Claire McCaskill on to discuss her efforts to close the wage gap between men and women.

“Look, I question the intentions of a lot of people who vote against this,” said Brzezinski, referring to legislation Sen. McCaskill has cosponsored. “But if they are looking to, I don’t know, get re-elected and they want to pander to women voters, trust me, vote for this.”

Frequent panelist and former RNC chair Michael Steele gave Brzezinski an explanation of why someone would vote against the “Paycheck Fairness Act” today. “Well, you know, again, you’re between a rock and hard place, politically,” he said. “I mean, it’s one of those arguments that you want to be on the right side of it, obviously, but the reality of it is, you know, what’s the politics here?”

“The reality of it is,” he said, “right now, in this political cycle, as heated and as polarized as it is, a lot of folks will see this as nothing more than a way to sort of back one party in the corner, and there’s nothing that’s really going to change beyond the legislation.”

“And you talk about the corporate boards out there,” he continued. “To be political about it, we’ve already acknowledged that a lot of those boards are… CEOs are democrats; they have given to Obama, supported this administration. Yet here we, waiting until this heated election cycle to bring this up. Why wasn’t this one of the top agenda items when the President came up with his economic plan to empower everybody?”

Brzezinski hit right back. “Come on,” she told him, citing the the Lilly Ledbetter Act. “First thing he did. There’s just nothing. You got nothing.”

MSNBC’s Chuck Todd then turned things back to McCaskill, asking her whether this is not a calculated use of a “wedge issue” during an election year.

Listen, if you want me to be critical of this bill coming up right now, honestly, you haven’t been paying attention. Because for the last two years, Mitch McConnell has been trying to figure out what amendments he can put on the floor to make my life miserable. There have been so many “gotcha” votes. All they have done for the last two years is be obstructist and put something on the floor that would get me to vote against my own mother. The games that have been played by the Republican party, during our efforts to do something during this recession… Now, are we without sin? Of course we aren’t. And that’s part of the problem here.

You know, I’m a moderate. I want us to get along. I work with Republicans and frankly, a lot of them have been told to stay away from me right now, because they are trying so hard to take me out. I continue to say, and I will say until I go to my grave, it is a good thing to work with the other party, it is good to find compromise. I do not want to say “my way or the highway.” I want to build highways. I don’t want to say my way or the highway. And that’s what’s going on in this election. Are we going to go to the extreme, like my opponents, or take care of the moderate middle?

“It’s like putting a bill out there that says we agree the sky is blue, and the Republicans saying we don’t,” concluded Brzezinski.