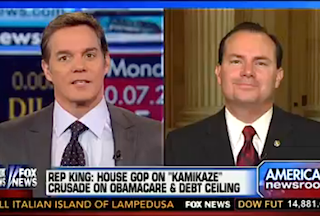 Rep. Peter King (R-NY) has been the loudest and most consistent opposition voice to tea party senators like Ted Cruz (R-TX) and Mike Lee (R-UT) over tactics that led to the now week-long government shutdown. And King’s rhetoric continued on Fox News Sunday yesterday, when he called the strategy “doomed to fail” from the start. Monday morning, Lee defended himself against the accusations, calling King “just plain wrong.”

“He’s mistaken,” Lee said of King. “I respectfully, but forcefully disagree with Representative King. He’s just plain wrong. This is an important strategy. This is something we have to do to protect the American people.” At the same time, Lee said he wanted to “applaud” House Speaker John Boehner (R-OH) and House Majority Leader Eric Cantor (R-VA) for “protecting the people from the harmful effects of Obamacare.”

Turning the narrative around on King, he called the Democratic strategy, which he described as “unless you fund every part of government including Obamacare, we’ll not let you fund anything” as “not defensible” and “crazy.”

Later, Lee responded to comments by President Obama, who has said he’s willing to negotiate on Obamacare and the budget, but only after Republicans agree to reopen the government and raise the debt ceiling.

Lee called Obama’s apparent willingness to negotiate a “welcome change,” but added, “So far, what he has been telling us is you do it exactly my way or we’ll not do it at all. He can’t do that. He’s not a dictator, he’s not a despot.”