Sen. Mike Lee Takes On HBO Over Critical Portrayal In The Newsroom

Sen. Mike Lee Takes On HBO Over Critical Portrayal In The Newsroom 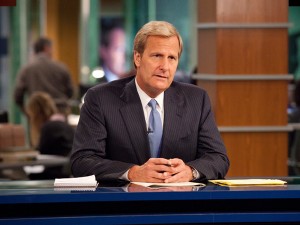 HBO’s new show, and Aaron Sorkin‘s latest widely discussed project, The Newsroom has elicited no shortage of reactions (many negative) from essentially everyone. Add to that list Utah Sen. Mike Lee (R), who was displeased with the show’s portrayal of his past stances — and contacted HBO to air his grievances.

As the Salt Lake Tribune put it, the episode, which was based on the rise of the Tea Party, pegged the Republican senator as “an extremist hellbent on tossing out a constitutional amendment.” The Fourteenth Amendment, to be precise. In the show, anchor Will McAvoy (played by Jeff Daniels) said “the centerpiece of Mike Lee’s stump speech is repealing the 14th Amendment. It’s an applause line, and he’s going to win his primary by double digits.”

The exchange, via the Tribune:

“Bob Bennett, the most conservative member of the Senate, is going to lose his primary race to a guy named Mike Lee, because Lee found room to the right of Bennett,” McAvoy says.

“You wouldn’t think that was possible,” responds the news division chief, Charlie Skinner, played by Sam Waterston. “How is there room to the right of Bob Bennett?”

“For starters,” McAvoy answers, “the centerpiece of Mike Lee’s stump speech is repealing the 14th Amendment. It’s an applause line, and he’s going to win his primary by double digits.”

Lee’s office maintains that the senator never wanted to repeal the amendement, but rather, supported “clarifying” its interpretation. Bob Bennett, Lee’s opponent in 2010, lost his re-election battle not during the primary, but at the Utah Republican Convention.

Lee spokesman Brian Phillips said criticism of the senator isn’t off limits, but it does need to be factual. “Lee obviously understands he is a public official and open to criticism,” Phillips said, “but this particular mistake was especially egregious and deserved to be corrected.”

The concern for factual accuracy stems from the fact that the show is set in the near past, and its fictional news show tackles real events, such as the rise of the Tea Party in the episode in question — as well as Arizona’s immigration law and the BP oil spill.