Sen. Mike Lee: ‘We Have Support in Senate’ to Defund ObamaCare 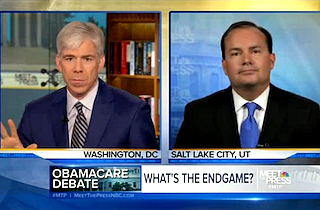 Senator Mike Lee (R-UT), part of the defund-ObamaCare battery with Senator Ted Cruz (R-TX), had trouble answering Meet the Press host David Gregory’s query Sunday morning as to whether he had the votes in the Senate to pass the House’s continuing resolution defunding ObamaCare.

Lee and Cruz had signalled earlier in the week that the bill did not have the votes in the upper chamber, angering House Republicans who said they had passed it at the Senators’ urging.

“We have to ask the question,” Lee said. “How many more people will have to lose their jobs, or have their wages cut, or lose their health care benefits, before Congress does something to protect the American people? How many more states will have to announce that premiums are going up? This week we saw Home Depot announcing that 20,000 employees will lose their health care benefits. The House boldly acted this week, and I commend Speaker Boehner for his leadership—”

“But I asked a direct question,” Gregory said. “Do you have support in the Senate to defund ObamaCare, or don’t you?”

“We have support in the Senate,” Lee said. “All forty-five Republicans in the Senate in March voted to defund ObamaCare. We’ll keep those and add a forty-sixth, Jeff Chiesa, from New Jersey. I hope that a few Senate Democrats, particularly those from red states who were up for reelection this year, will consider joining us. This is what the American people asked us to do.”