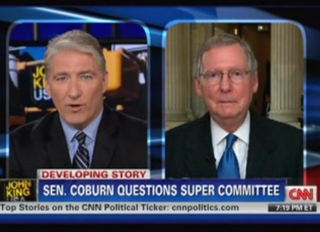 While the Tea Party is by and large considered right wing, that doesn’t mean it gets along with most Republicans, though tonight one of those blacklisted GOPers sent love to a group largely distrustful of him. On tonight’s John King USA, Senate Minority Leader Mitch McConnell told host John King that, no matter how much they may dislike him, “I love them” for helping them regain a sizable contingent in Congress.

Sen. McConnell extended his praise after being asked to discuss the Tea Party by King, who noted that “many people in the Tea Party, they don’t think so highly of you. They view you as part of what they call the dreaded Republican establishment that’s too willing to compromise, to willing to make deals.” Sen. McConnell asserted that he didn’t seem to mind the skepticism at all:

Regardless of what they think about me, I love them. I think without their effort we wouldn’t be in a position to begin to change the direction in Washington. They helped us have a good election last year in which we took the House of Representatives and now have a robust minority in the Senate. Without them, we wouldn’t even be having this discussion. In the previous Congress it was spend, spend, spend– no consideration whatsoever for the financial problems the United States had. That’s changed, those days are behind us and we thank the Tea Party for helping us get in this position.

Sen. McConnell’s effusive praise comes as somewhat of a shock given his relationship with the Tea Party– after all, they’ve become a force in Congress no thanks to him. This is the Minority Leader who refused to endorse the Senate’s most vocal Tea Party leader, fellow Kentuckian Rand Paul, when he was a candidate (and then some). And in this debate, Sen. McConnell never once considered the option of not raising the debt ceiling at all, which was wildly popular among Tea Party groups. Has Sen. McConnell had a change of heart now that the Tea Party got his party a major victory in not having to raise taxes in this budget deal, or is he just appeasing a group he may consider far more powerful than knowledgeable to avoid a primary challenge in the future?