Sen. Orrin Hatch To Greta Van Susteren: ‘I Don’t Have Any Respect For’ Freedomworks
video

Sen. Orrin Hatch To Greta Van Susteren: ‘I Don’t Have Any Respect For’ Freedomworks 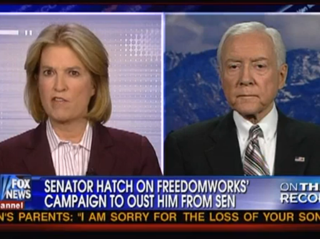 Senator Orrin Hatch, the most senior Republican in the Senate, has a primary challenge, and he has “no respect” for the people responsible for this. Sen. Hatch joined Greta Van Susteren last night to discuss the potential, now realized, of a primary challenge against him, and Sen. Hatch had some nasty words for Freedomworks and its leader, Dick Armey.

“Freedomworks, the group of Dick Armey, is gunning for you,” Van Susteren informed Sen. Hatch, who seemed to mind only what he insisted were lies from the group. “They take a few dozen of my votes out of the better of 12,000 votes that I’ve cast, distort those votes and lie about them, direct lie about them.” He argued they were only trying to raise money. “They take someone like myself who everybody knows and they trash Orrin Hatch and they raise a lot of money from conservatives all over the country who think what they’re saying is true.” He concluded with a flourish, “they’re not people I have very much respect for. I don’t have any respect for them, in fact.”

Van Susteren appeared perplexed at someone like Hatch receiving an attack from the right, though Sen. Hatch noted that he did, in fact, have Tea Party support. Freedomworks was a separate issue, a group who “have plush offices right down on Capitol Hill” and are “in it for the money.” “You can go down the list vote after vote after vote,” he insisted, and find lies. As for Armey himself, Sen. Hatch was plain in his language. “I have no respect for Dick at this particular point,” calling the group “radical libertarians” but noting that “I’m libertarian in a lot of ways. But I’m not a radical.”

Given the news that Hatch has a primary on his shoulders, this doesn’t appear to be a feud with and end near in sight.