Sen. Rand Paul: Blaming The Tea Party For The Debt Is ‘Like Blaming Firemen’ For The Fire 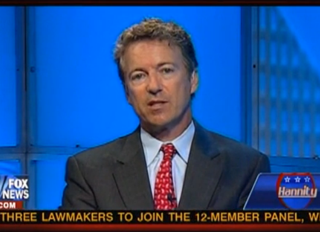 As most of the anti-Tea Party rhetoric from the left came after Congress went into recess, many of the body’s Tea Party sympathizers have mostly kept quiet. Tonight, Republican Sen. Rand Paul finally got a chance to respond to the idea that it was his movement that caused the chaos current in the stock market, prompted by the national credit downgrade. “It’s really ludicrous on the face of it,” he told Sean Hannity, arguing that blaming “a minority of a minority party” for the debt was “sort of like blaming the fireman when he comes over to put out the fire.”

Hannity welcomed Rep. Paul back from the latter’s home state of Kentucky, asking initially for a response to the claims from Democrats that the Tea Party had caused too much instability in the government for the markets to feel safe. He responded with the aforementioned fireman analogy, adding, “a lot of us were elected to put out the fire, to handle the debt, to do something about the debt– that’s why we came to Washington… now they’re going to blame the debt on us?”

Sen. Paul also argued that blaming the Tea Party was symptomatic of “the failure of leadership [in the White House], that he will not accept responsibility,” and warned that the President was close to having a “failed presidency.” Though it’s no secret, Hannity noted that for him the presidency had long ago fallen into failure territory. Sen. Paul did offer a lifesaver to the President, suggesting there was a way he could salvage his tenure: “his only chance to turn his presidency around is to get someone to replace Timothy Geithner.”

Hannity also asked Sen. Paul about the riots in the UK, and wondered whether the socioeconomic situation that led to them was looming in the horizon for America. Sen. Paul suggested that some of the reason for the riots were that entitlement programs needed to end abruptly because the money had run out– “the way to avoid… rioting in the streets is to start fixing the problem now.”