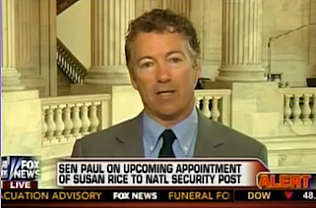 Less than 3 hours after news broke that President Obama would be naming U.N. Ambassador Susan Rice as his next national security adviser, Senator Rand Paul (R-KY) expressed his disappointment with the president’s decision during an interview with Fox News. A vocal critic of Rice since she acted as a spokesperson for the administration following the Benghazi attack last September, Paul said he “can’t imagine” keeping Rice on at all, “much less promoting her to an important position.”

“I think the president is struggling to regain the moral authority to lead the nation,” Paul said, repeating comments he made on Hannity last night, “and this doesn’t really encourage anyone to reappoint or to promote basically the person who is guilty of misleading us over the Benghazi tragedy.” He asked, “how will they ever the authority for people to believe what they’re saying when he is promoting someone who directly and deliberately misled the public over Benghazi?”

Fox host Martha MacCallum challenged Paul’s strong reaction, suggesting that this move by President Obama and Attorney General Eric Holder‘s decision to keep pursuing press leaks indicate that the administration will move forward with its agenda “whether you like it or not opposition.”

Paul maintained that he still has questions about the Benghazi attack and insisted that the controversy over it won’t be going away anytime soon. Placing that scandal together with the IRS targeting and Justice Department investigations, he admitted, “there are certain aspects of the president’s policy that I wanted to like,” including defense of the First Amendment, “but I’m really disappointed.”

In yet another display of the generational divide among Republicans in the Senate, Sen. John McCain (R-AZ) expressed a very different, more conciliatory reaction to Rice’s appointment on Twitter. Though he has also been a fierce critic of the new national security adviser, he pledged to “make every effort to work with her on important issues.”

McCain’s close ally Sen. Lindsey Graham (R-SC), who has perhaps been the most vocal critic of Rice, has so far stayed silent on the matter.