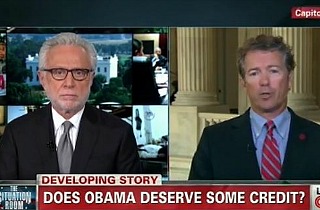 On Monday, Sen. Rand Paul (R-KY) joined CNN anchor Wolf Blitzer where he criticized Republicans who agreed with President Barack Obama’s push for intervention into the Syrian civil war. He said that, while he opposes Obama’s intervention proposal, he embraced the White House’s decision on Tuesday to entertain a Russian proposal which may avert military action.

“From your perspective, would it now be appropriate to vote yes for some sort of Senate resolution authorizing the use of force, if that could be a credible threat to use over the Syrians to come up with that kind of diplomatic solutions the Russians are now proposing?” Blitzer asked.

Blitzer probed Paul to see if he “acknowledged” that the advances made today with Syria is the result of the White House’s diplomatic campaign. He again asked if Paul would vote for the authorization of force now that the Syria crisis is, in his opinion, on a track towards a peaceful resolution.

Paul said he would not, but he expressed his pleasure that Moscow offered to broker a peaceful resolution as a result of an “off-hand comment” made by Sec. John Kerry.

“I think the Russians have played an excellent gambit or a game of geopolitical chess with us,” Paul opined. “I think that does have to include Russia.”

Blitzer insisted that the White House contests that Kerry’s comment was not “off-hand” and that the Russian proposal was the administration’s plan all along.

“Does the president deserve at least some credit for moving the situation potentially towards this diplomatic breakthrough?” Blitzer asked.

“I don’t see this in partisan way where I’ve got to say ‘Oh, the president doesn’t get credit,’” Paul replied. “Give credit where credit is due, and if we get a diplomatic solution, absolutely.”