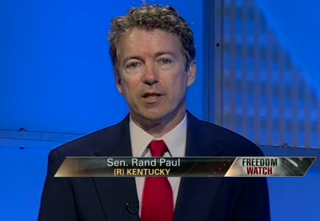 The budget battle currently ongoing in Congress has the parties in a gridlock and sometimes presented the threat of a full government shutdown. Yet the debt as an issue exists, and no one is trying to get America back to a surplus as radically as Sen. Rand Paul. Reminding Fox Business host Judge Andrew Napolitano on Freedom Watch of his campaign promises last night, Sen. Paul explained a budget proposal that would reduce spending by $4 trillion.

The proposal would cut most discretionary spending in many departments, as well as full departments themselves, including what Judge Napolitano described as the “unconstitutional” Departments of Commerce, Education, Housing and Urban Development, and Energy. Commending Sen. Paul for his extremely detailed look at the national budget, he allowed him to explain precisely why he cut what he did and made specific suggestions. Sen. Paul replied that, while many of his colleagues prefer to deal in vague terms, “if you don’t crunch the numbers, you don’t know what to cut.”

Judge Napolitano also played devil’s advocate, asking Sen. Paul what he expects the hundreds– if not thousands– of people that would lose their jobs due to these budget cuts will now do for a living. Sen. Paul was not particularly empathetic towards federal workers, arguing that “these people are not making a useful product that anybody wants” and that they should “find useful employment in the private sector.” Despite the dramatic cuts, however, Sen. Paul didn’t see any serious danger of the government shutting down over budget matters, or even of a rift between he and other Republicans that have expressed an interest in not cutting some of the programs Sen. Paul intends to, including his Kentucky colleague Sen. Mitch McConnell. “Many others have come to me quietly,” Sen. Paul noted, “and said they’re almost there.”