Sen. Reid: Junk Mail Is Seniors ‘Only Way Of Communicating Or Feeling Like They’re Part Of The Real World’
video

Sen. Reid: Junk Mail Is Seniors ‘Only Way Of Communicating Or Feeling Like They’re Part Of The Real World’ 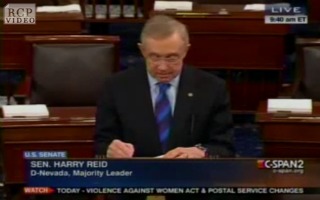 Senate Majority Leader Harry Reid (D-NV) delivered a spirited defense of the United States Post Office on Thursday, telling his Senate colleagues that – while most of the parcels delivered today are “what some people refer to as junk mail,” it remains elderly American’s “love to get junk mail” and feel that it’s “their only way of communicating or feeling like they’re part of the real world.”

“I’ll come home tonight here to my home in Washington and there’ll be some mail there. A lot of it is what some people refer to as junk mail, but for the people who are sending that mail, it’s very important,” Reid said. “And when talking about seniors, seniors love getting junk mail. It’s sometimes their only way of communicating or feeling like they’re part of the real world.”

“Unless we act quickly, thousands of post offices – as I indicated, there are more than 30,000 in America, many of them rural – will close,” Reid continued.

“These rural post offices [are] the only way that people who are in those small communities to communicate with the outside world,” attested Reid. “It’s their way of keeping in touch with the world.”

Reid concluded by saying that the Post Office is important to many Americans, including the many veterans who are employed by the post service. However, the post office has seen a “21 percent drop in mail volume over the last five years.”

Watch Reid defend the post office below via CSPAN 2: