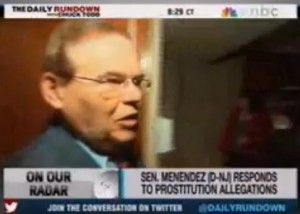 The burgeoning scandal surrounding allegations that Senator Robert Menendez (D-NJ) traveled to the Dominican Republic to exploit underage prostitutes took another turn on Thursday, as Sen. Menendez responded on camera to those allegations for the first time, and shifted focus, from the conservative blog that first reported the allegations, to the accusers themselves. On MSNBC’s The Daily Rundown, NBC News Political Director Chuck Todd played video of the Senator’s brief comment, and read a less-than-supportive statement from senior U.S. Senator from New Jersey Frank Lautenberg (D-NJ).

Todd explained that reporters caught up to Sen. Menendez outside the 76th annual New Jersey Chamber Of Commerce dinner, and asked him about the allegations

“I have comments already from my office,” Menendez said, never breaking stride. “These are nameless, faceless, anonymous allegations.”

Until now, Sen. Menendez’ counteroffensive has mainly involved attacking The Daily Caller, the conservative blog that first reported the allegations. While Sen. Menendez is due the presumption of innocence, attacking the presumably underage accusers, in a way that emphasizes the contrast between the Senator’s power and prestige with their powerlessness, is despicable. The fact that these young women are “nameless, faceless,” and “anonymous” has no bearing on the truth of their allegations, and is precisely the reason these young women are targeted for exploitation.

Todd went on to explain that Senator Frank Lautenberg, “instead of rejecting the accusations out of hand …seemed to entertain the possibility that they are true, saying this, quote, ‘If there are infractions, as they are reported, it’s too bad. I think Bob will survive this with his good work. This is a terrible tragedy.'”

Here’s some more of what Sen. Lautenberg said, from The Newark Star-Ledger:

“If there are infractions as they are reported, it’s too bad,” Lautenberg told reporters.

…”There a lot that’s said and covered, but I for one know Bob as a very capable United States senator, and I’m sorry to see him in this position,” Lautenberg said. “But I can’t give you anything more. Don’t want to. Don’t know to.”

“And I don’t want to be part of the external review at all,” Lautenberg said. “It’s much too sensitive a thing to be discussed randomly.”

Lautenberg later added he had not spoken to Menendez about the accusations but called them “devastating.”

“(He) has built an almost sterling reputation for a lot of years and our hope is that this, what we’re hearing, is not as it’s presented,” Lautenberg said. “I think Bob will survive this with his good work. This is a terrible tragedy. And we’re not yet sure what all of the facts are.”

What Sen. Menendez stands accused of goes beyond a “sex scandal,” and whatever the facts turn out to be, his accusers should not be attacked, certainly not for protecting themselves.