Senator Tammy Duckworth (D-IL) ripped into Treasury Secretary Steve Mnuchin Sunday afternoon over a proposed stimulus package, aimed to offer economic relief during the coronavirus outbreak, calling it out as a one-sided proposal that “does nothing to help struggling workers.”

Duckworth, on CNN Newsroom With Fredricka Whitfield, also brought a photo of Mnuchin holding up signed sheets of money from back in November 2019 when he and his wife visited the Bureau of Engraving and Printing in Washington, D.C., questioning his character.

“Talk about the proposed stimulus package. Senator [Mitch] McConnell is saying that now this vote has been pushed back possibly to 6:00. What kind of encouragement or lack thereof are you getting from this process and the hope from this stimulus package?” Duckworth was asked.

“The package that the Republicans have drawn up does nothing to help struggling workers. Struggling workers need help today, and they need jobs safeguarded for tomorrow. It has no protections for them,” she said.

The senator then continued to rip the proposed stimulus package, calling it a “$500 billion slush fund for Steve Mnuchin to hand out loans to corporations.”

“First responders need PPE equipment, personal protective equipment, and resources today to our hospitals and our first responders. Nothing in it for them. And instead, it creates a $500 billion slush fund for Steve Mnuchin to hand out loans to corporations as he pleases.”

Duckworth then held up a picture of Mnuchin and his wife pictured with signed sheets of cash, while beginning to ask why he should be trusted to make decisions in the best interest of “working Americans.” 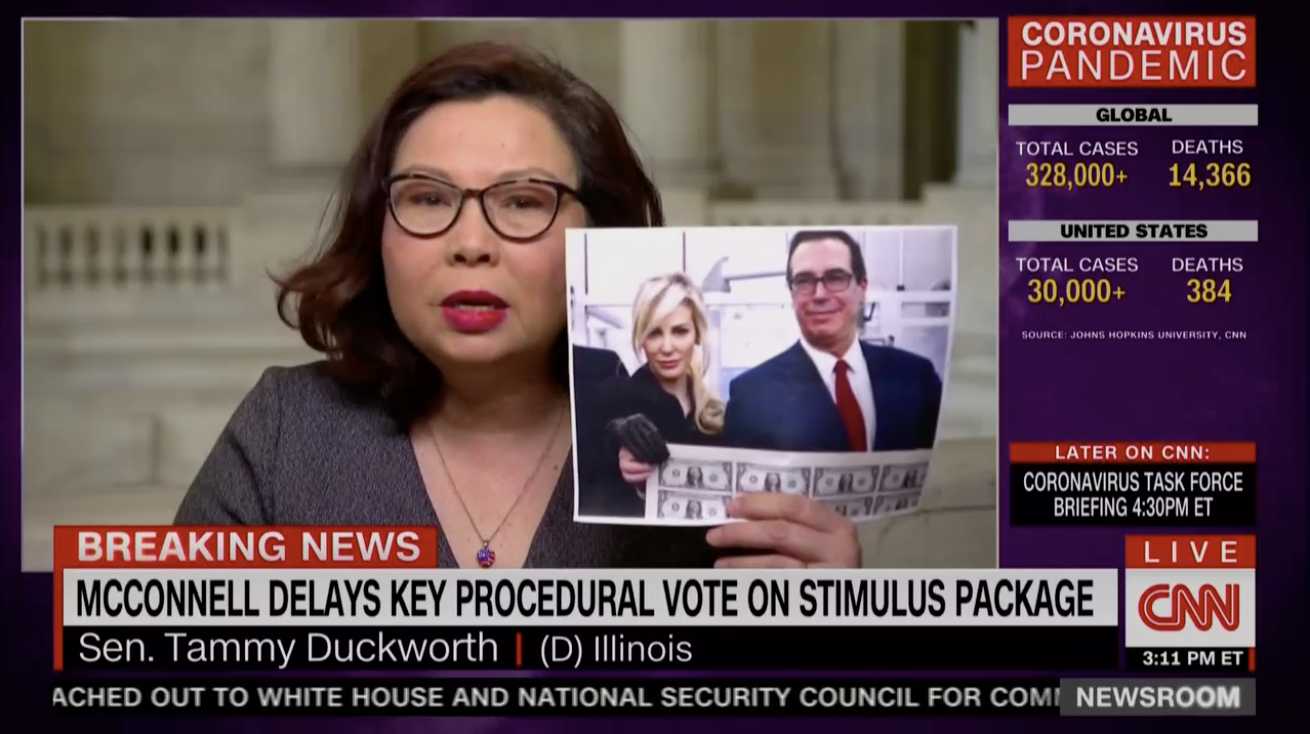 The senator added, “The slush fund proposed in their bill, no Democrat had any chance to put any, you know, requirements into does not provide oversights for him.”

Whitfield then asked, “What do you like that is in the proposal because reportedly, this legislation would include $2 billion to also help send out the $1,200 checks to many American adults along with $500, perhaps $600 for children. What else in that bill seems plausible or appetizing at all to you?”

“This bill is all skewed towards corporations. It’s skewed towards a slush fund that Steve Mnuchin will be able to write checks to whomever he wants. Even to Trump organizations.”

“We need to put Americans first and make sure Americans can get back to work when the crisis is over with and we need money and resources to our hospitals right now and it doesn’t have that in there,” Duckworth concluded.