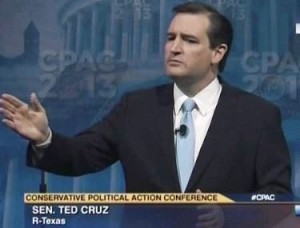 Texas GOP Senator Ted Cruz closed out CPAC with a speech that went over the difficulties conservatives face in President Obama’s second term while highlighting two key ways they can succeed in beating back his agenda. Cruz said they have to focus on defending the constitution and championing what he called “growth and opportunity.”

Cruz, sounding very much like he was giving a stump speech as much as he was rallying conservatives to their cause, went through several constitutional amendments that he believes President Obama is attacking. The first, second, fourth, sixth, and tenth amendments were all parts of the Bill of Rights that he said were under attack by Obama and the Democrats in the Senate.

“The Second Amendment provides that the right of the people to keep and bear arms shall not be infringed. Now what part of shall not be infringed do they not understand? But it doesn’t end with the Second Amendment. The First Amendment is a big target in congress. Set aside their love for regulating campaign speech, because it seems every campaign an elected official hates hates hates when the people criticize them,” said Cruz.

In the areas of “growth and opportunity” Cruz put forth a list of things he thinks need to repealed to improve the sputtering economy.

“We need to eliminate corporate welfare, we need to build the keystone pipeline, we need to reign in the EPA,” Cruz said.

Cruz reflected on an incident with the EPA in Texas.

“In West Texas the EPA is trying to use a lizard to shut down oil and gas production. My opinion of lizards? They make dern fine boots,” said Cruz, again drawing laughs from the crowd.

“We need to audit the fed, and we need to stop QE infinity, we need to abolish the department of education, we champion school choice, we’ve got to stand with Israel. We need to stop sending foreign aid to nations that hate us,” said Cruz.

Watch the clip below via CSPAN.