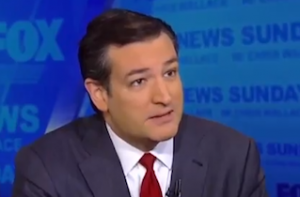 Using Sen. Ted Cruz‘s own words against him, Senate Democrats launched an attack on their Republican colleague from Texas Tuesday when they posted the video below to YouTube. The approximately one minute clip contrasts comments Cruz made on Fox News Sunday in early January with his threats this week, along with Senators Rand Paul (R-KY) and Mike Lee (R-UT) to filibuster the senate gun control bill.

On January 6th, Cruz made a strong case against new gun control measures to Chris Wallace on Fox News Sunday, going so far as to call them “unconstitutional.” But, as the Democrats’ video shows, he also left the door open for what he referred to as “common sense” measures to reduce gun violence. “Right now, a lot of states, a lot of local jurisdictions, are not reporting criminal convictions, are not reporting mental health barriers to gun ownership,” Cruz said then, “and so the federal database is not nearly as good as it should be.”

Democrats set out to contrast those statements with Cruz’s recent letter to Senate Majority Leader Harry Reid (D-NV), which read, in part, “we will oppose the motion to proceed to any legislation that will serve as a vehicle for any additional gun restrictions.” After replaying his original sentiments from January, the video concludes with the words, “We agree. Let’s vote on that.”

A spokeswoman for Sen. Cruz, Catherine Frazier, fundamentally rejected the accusations against the senator. “Senate Democrats are blatantly misconstruing Sen. Cruz’s record to distract from how extreme they are on gun control and how out of touch they are with the American people,” she reportedly told POLITICO. “Democrats’ proposed legislation would require universal background checks for private sales between law-abiding citizens, which according to DOJ would be effective only if accompanied by a national gun registry – a measure that raises serious constitutional concerns.”