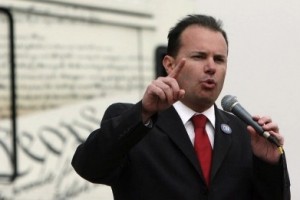 On ABC’s This Week host Christiane Amanpour followed up on the political effects of the Arizona shooting tragedy of two weeks ago, focusing on the measured political rhetoric inside the beltway that followed. But Senator Mike Lee (R-UT) had a different take, implying that a kinder and gentler political discourse somehow equates to a victory for the shooter, Jared Loughner. Lee said, “the shooter wins if we, who’ve been elected, change what we do just because of what he did.”

Lee earlier suggested that the nation’s gun control laws should similarly remain steadfastly intact. According to Lee, the tightening of laws meant to prevent people with mental illness from obtaining a firearm should not considered, despite the fact that alleged gunman Jared Lee Loughner was able to purchase a semi-automatic handgun and multiple high-capacity magazines at the end of last year, even in the face of some clear questions about his mental stability.

“We have state and federal laws on the books that already prohibit citizens who have been deemed mentally ill from possessing firearms,” Lee said during an interview with CNN earlier this month, the Salt Lake Tribune reports. “I don’t think we’re going to lessen our way out of the risk [by adding more restrictions]. To the contrary, there is abundant research suggesting in cities where more people own guns, the crime rate, especially the murder rate, goes down.”

Watch the video courtesy of ABC News below: