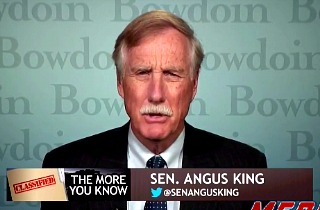 Senator Angus King (I-ME), an independent who often caucuses with Democrats, harshly criticized former Vice President Dick Cheney for defending enhanced interrogation techniques (torture, to those of you scoring at home), after MSNBC’s Steve Kornacki played a clip of Cheney arguing the techniques were not torture and were within the confines of the law.

“Frankly, I was stunned to hear that quote from Vice President Cheney just now,” King said. “If he doesn’t think that was torture, I would invite him anywhere in the United States to sit in a waterboard and go through what those people went through, one of them 100-plus-odd times. That’s ridiculous to make that claim. This was torture by anybody’s definition. John McCain said it’s torture and I think he’s in a better position to know that than Vice President Cheney.”

“To say it was carefully managed and everybody knew what was going on, that’s absolute nonsense,” King continued. “If you go through the [Senate investigative report], it’s clear that the people doing this weren’t being honest, even with their superiors at the White House, at the upper branches of the CIA, the Office of Legal Counsel, the attorney general, the Congress of the United States, the national security adviser. that’s one of the really bad things about this. what they did was bad, but then to misrepresenting it the way they did throughout a number of years, that’s what’s really the worst thing.”