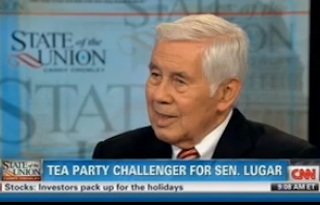 Senator Richard Lugar (R-IN) has served the state of Indiana in six consecutive terms in the U.S. Senate. While hard core conservatives may derisively point to his willingness to work with his ideological foes across the aisle, Lugar is a well respected member of congress recognized for his tough but well informed positions on U.S. foreign policy. Still, he finds himself in battle with some home-grown Tea Party candidates for his Senate seat, which Lugar took aim at during a sit down with CNN’s Candy Crowley.

The term “GOP Civil War” was thrown around a lot in the midterm elections of 2010, and came to represent the seeming battle for the Republican party soul by two factions: there was the established GOP represented by beltway insiders like Karl Rove, Charles Krauthammer and Newt Gingrich, and on the other side there were Tea Party endorsed candidates like Christine O’Donnell and Sharon Angle (neither of whom fared well enough to win the general election.)

Lugar addressed the recent history of Tea Party candidates not faring so well in his conversation with Crowley, ostensibly blaming their candidacies on the lack of a Senate majority. Lugar said “Republicans lost the seats before in Nevada and New Jersey and Colorado where there were people who were claiming they wanted somebody who was more of their Tea Party aspect but they killed off the Republican majority.” He then added “this is one of the reasons why we have a minority in the Senate right now.”

Given this sort of rhetoric from Lugar — an individual known more for his calm and reasoned demeanor over fiery political rhetoric — perhaps it’s time to consider the notion that the Tea Party label is one that established politicians are shying away from instead of looking to join?

Watch the segment of State of the Union below, courtesy of CNN: