‘Sending A Signal To Fox’: The Five Crew Asks Why Obama Admin Went After Rosen Leaks But Not NY Times
VIDEO

‘Sending A Signal To Fox’: The Five Crew Asks Why Obama Admin Went After Rosen Leaks But Not NY Times 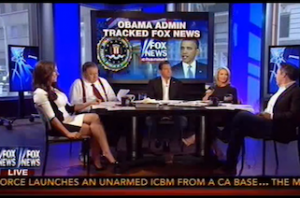 In their overwhelming defense of Fox News colleague James Rosen Wednesday afternoon, the hosts of The Five speculated about the real reason the Obama administration went after him specifically, while seemingly ignoring leaks to other media institutions like The New York Times. “The government calling Rosen a ‘co-conspirator,'” Greg Gutfeld asserted in his opening monologue, “is like Chris Matthews calling someone unstable.”

Eric Bolling didn’t buy that the Obama administration really went after Rosen’s emails and phone records because of reporting he was doing on North Korea, as stated in the affidavit. “It was about the enemies list,” Bolling said, referring to his belief that the White House actively targets Fox News. “It was about sending a clear signal that they are stronger.”

He also called out the administration for having a double standard, much in the same way that Fox contributor Kirsten Powers did earlier today. “Rosen is called a co-conspirator in this ‘crime’ for being provocative, asking questions and doing his job,” Bolling said. “Yet when The New York Times puts on their front page details of Obama’s kill list, how he decides who goes on it, who gets killed and who doesn’t, it’s not investigated. When the details surrounding the bin Laden kill is leaked to every left-wing media site first, there is no investigation. No one is going to jail for that. No one’s phones are taps.”

When Bob Beckel pushed back on Bolling on the reason behind the adminstration’s targeting of Rosen, Bolling maintained “it had nothing to do with North Korea” and “everything to do with sending a signal to Fox.”