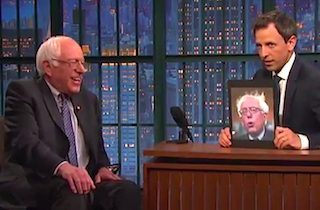 As has suddenly become a new tradition for freshly–announced presidential candidates, Sen. Bernie Sanders (I-VT) stopped by Late Night with Seth Meyers last night to lay out his vision for the future and receive some light ribbing from the host.

“First of all, you look great, your hair looks great,” Seth Meyers said at the top of the interview before pulling out a photo of what he expected Sanders to look like. As Sanders said in his defense, “That was after the electric shock.”

The host went on to ask Sanders why he thinks he can get away with calling himself a “Socialist” when people routinely use that word as an “insult” against President Barack Obama. But Sanders was quick to win the audience’s affection, delivering several applause lines on issues like free tuition for college students and diminishing the growing gap between rich and poor.

Later, Meyers brought up Sanders’ first real campaign controversy: a “satire” essay he wrote about rape fantasies in 1972. As he did on Meet the Press, Sanders dismissed the piece as “bad fiction” in the style of 50 Shades of Grey.

“Considering the success of the 50 Shades of Grey books,” Meyers joked, “do you regret that you did not follow that path more and not do this politics thing? You could be rolling in cash right now.”

“No, it was bad fiction — I learned my lesson — I think I could make a good president, but I write fiction pretty poorly,” Sanders replied.

But just when he thought he was in the clear, Meyers presented a clip of Sanders singing “This Land Is Your Land” on his 1987 folk album.

“Big mistake,” Sanders admitted. “So now we have learned that I do bad fiction and bad music. But I do have some other attributes that are better than that.”