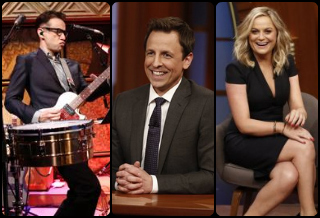 “We’ve come a long way.” That’s what Seth Meyers told Amy Poehler when she sat down to be his first guest on the brand new Late Night Monday night. And while it’s true that these two Saturday Night Live cast mates and former Weekend Update co-anchors have moved up in the entertainment world since they joined that show in 2001, on its first night, Late Night with Seth Meyers had some trouble moving beyond the SNL universe — not that that’s necessarily a bad thing.

Besides Poehler, Meyers also has an old SNL friend on board in the form of band leader Fred Armisen, who proved himself to be a much funnier foil that someone like David Letterman’s Paul Shaffer, for instance, with his seemingly improvised riff on his new reality show “Recent History.”

Unfortunately, that simple, conversational section, was funnier than Meyers’ Update-style monologue and the “Venn Diagram” desk bit that followed. Meyers did not have much more luck with an Olympics-themed segment that felt a little past its prime post-closing ceremonies. There was not that much to add to the discourse about Bob Costas’ distorted pink eye vision. At times, the whole thing felt so much like Weekend Update that he might as well have been sitting in front of a big, brightly-colored map.

Besides a sweet nod to Jimmy Fallon in the “Thank You Notes” cold open, Meyers’ show did not really get off the ground until the guests came out. It was the opposite of Fallon’s first night, when he packed all the fireworks up front, from the cameo-filled pay-off of his $100 bet to the “Evolution of Hip-Hop Dancing” with Will Smith.

It wasn’t until Poehler came out and joined him that Meyers seemed truly comfortable in his new role. While he has plenty of experience delivering topical jokes, on both SNL and at 2011’s White House Correspondents Dinner, he’s best when he has someone sitting next to him to play with. When he got his chance to play the straight man, egging on an awkward reunion between Armisen and Poehler, Meyers was at his best.

But things got even better when Meyers’ second guest — Vice President Joe Biden — sat down between Poehler and the host. While I was hoping the show would find a way to get Poehler in character as the Biden-loving Leslie Knope from Parks and Recreation, she managed to be almost as funny with the vice president as herself. It’s only too bad Biden couldn’t throw Meyers a bone and announce his 2016 presidential bid on his show, as he teased in the clip below. Perhaps Biden thought launching his campaign at one in the morning, seated between two comedians was not the best idea.

During the promotional lead-up to last night’s premiere, Meyers has made pains to stress that his Late Night will not be simply an extension of SNL, despite the fact that he will have such potentially easy access to its current cast of characters. He recently told Bravo’s Andy Cohen that while there may be a good chance someone like Bill Hader’s Stefon will show up on Late Night, producer Lorne Michaels has been pushing him to “make it a new thing” and not resist the urge to rely too heavily on his SNL background.

Of course, Fallon also made the move from the Weekend Update desk to Late Night, but he had five years and several (mostly-failed) movies in between. Meyers is jumping into the show just three weeks after he departed SNL. Judging by his opening show, he has so far decided to lean into his strengths from that show rather than try to totally reinvent himself. That should keep his loyal fans happy but could prevent him from true, unqualified success on his own.

For the rest of his first week, Meyers does not have any more SNL friends scheduled to drop by (though you never know what could happen). Hopefully, someone like Kanye West, who will appear tonight, will help push Meyers out of his comfort zone and into a place where he can produce something that the non-SNL fan can enjoy as well.