Sex Sells, But Which One? Marketing To Straight Males Can Only Go So Far 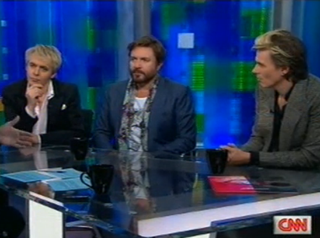 If you’re not a particularly big fan of Project Runway, you probably skipped out on Piers Morgan last night, whose ads spent the day reminding viewers he would be interviewing Heidi Klum. If you’re not particularly a fan of Project Runway and also a fan of 1980s New Romanticism, you would have been sorely disappointed, as the second half of the program featured and interview with 3/4ths of Duran Duran. As far as influence and conversational potential, the decision to advertise one over the other appears bizarre, but with the obvious difference between the two guests, one has to ask– is eye candy not all created equal?

The episode’s interviews were equally promoted online, and there is a serious case to be made that American audiences would be more interested in what a model famous on our televisions has to say than a 30-year-old band, however influential the latter may be. But one would be remiss not to admit that, as far as marketing throughout the history of television, one woman whose job it is to look beautiful will always trump three men. It’s a rule of thumb in advertising that could very well not have been in effect here, but to the extent of my knowledge, the ads really did only highlight one of the interviews.

This is not to accuse anyone of sexism, or even of being preferential in choosing who to highlight, but to use these interviews as a launchpad for a bigger discussion: in 2011 America, would a network be more willing to promote a beautiful image catering to straight men than a quality piece that does not play into the sex game as much? Perhaps the idea that one interview was far more heavily advertised than the other only served as an inspiration for a discussion on the matter of sex in advertising because it is a topic that has been floating around elsewhere– Details magazine published a piece on male objectification in the media in which they attribute the rise of this phenomenon to “the male gaze turning on itself.” It furthers a view that seems impossible to erode: a general belief that visual sexual cues happen to work better with men.

Jezebel’s review of the piece highlights this exact problem, and drives home the fact that using the male observer as a starting point for all advertising puts the horse behind the carriage:

But DETAILS overlooks one of the other crucial drivers of this increase in male narcissism: the growing awareness that women look. Not so long ago, psychologists insisted that most women simply weren’t visually aroused. Women, we were told, might have an aesthetic appreciation for a handsome guy, but they weren’t actively lusting after what they saw. After twenty years of being given permission to gaze on the hot and shirtless (from Marky Mark to Taylor Lautner), women have become more vocal than ever before about what they like to look at — and what they’re thinking about when they look. The old myth that women aren’t visual has been debunked by everyone from Sex and the City to the writers and readers at this very site.

Why must it be that appealing to straight male sensibilities will result in more sales of whatever product or service is being provided? Women constitute a plurality of the population; what invisible law of nature dictates (aside from residual and, thankfully, mostly debunked sexist pseudopsychology) that women will not respond to visual stimuli as much or more than men do? If women aren’t treated as part of the target demo, it is nearly impossible for them to become loyal customers in large numbers, and when the entire industry seems to neglect to cater to women, they can’t legitimately claim women aren’t responding as positively as men– whether it be to every show on Spanish TV or cable news or, yes, an interview with pop culture icons they probably would have missed, to bring the discussion full circle. Of course, there is a possibility that an alternative universe where women were rarely used as aesthetic objects would result in fewer eyeballs, but this is mostly uncharted territory in American media, and very much worth exploring.

RELATED: The End of Sexism

All of this, of course, is to say: Heidi Klum is pretty and all, but Piers Morgan really buried the lede on this one, if by “lede” you mean “very pretty and extremely interesting pop icons that didn’t really have to be all that interesting to compel women to watch.”

Below a segment of Morgan’s interview with Duran Duran (on the death of Amy Winehouse, via CNN: