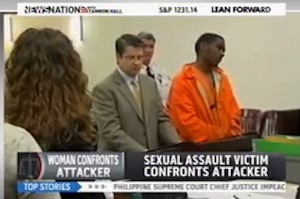 Sexual assault survivor Heidi Damon spoke with MSNBC’s Tamron Hall and discussed her brave confrontation with her assailant Javon Cooper, who was sentenced to 15 years in prison for his attack on her. “I am not the victim,’’ Damon proclaimed. “I am the victor.”

RELATED: Goldie Taylor Inspired To Share Her Own Story Of Sexual Abuse By Anger Over Penn St. Scandal

“My name is Heidi Elizabeth Damon. I have a name,” Damon told Cooper. “I have a name that will go on forever. You have a number and the title of the crimes that you’ve committed. Your name is Sex Offender, Attempted Murderer. Nice to put you away.”

Damon said to Hall that she had an “amazing support system” that helped her cope with the assault. Hall said that Cooper had “this smug look, this indifference that I think would have made me explode with anger.”

Damon hoped that her coming out as a sexual assault survivor would encourage others not to be ashamed of what has been done to them.

“By me coming out and talking and putting my name out there, it puts an actual person behind all of this,” Damon said. “If my story or me coming forward and showing my face helps other people who have been victimized come out and say: ‘I’m not the bad person, there’s nothing wrong with me, it is the person that did this to me,’ that is what I hopefully will achieve.”

Watch Damon bravely address her attacker below via MSNBC: