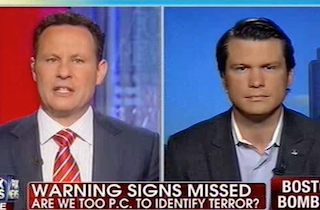 If the FBI was warned about Boston bombing suspect Tamerlan Tsarnaev and his ties to radical Islam, Fox & Friends‘ Brian Kilmeade stated on Monday, why wasn’t he stopped before the attack? Pete Hegseth, of Concerned Veterans for America, joined Kilmeade to discuss the “poison” that is political correctness. It’s not about discrimination, he argued, but simply going after the root of the threats.

Some, such as Rep. Peter King, have already called for increased surveillance of the Muslim community, asserting that to be the root of many such threats and attacks.

“Political correctness is a poison to our security and defenses,” Hegseth contended. “It imposes a willful blindness, both at the macro level when unwilling to engage with radical Islamism or whatever you want to call it — if you’re not willing to call it what it is — and at the micro level, at the street level. When you’ve got a question, someone looks suspicious, you’re not sure if you should act — and then you add another layer, of, ‘Well, they look like they could be Muslim, I don’t want to offend them.'”

It’s not just based on faith or race, he clarified, but on threat signs. Kilmeade recalled a Pakistani professor who said he didn’t mind being profiled at the airport because he wants to be safe. “Why can’t we go through that model in order to narrow down who the perpetrators might be?” he asked.

Hegseth said Boston should result in a lesson learned, pointing to the suspect’s links to “radical ideology” and controversial mosques. We should know who’s there and what they’re talking about, he added, “because those have been the epicenters of this type of activity. Shame on us if we don’t now again learn our lesson.”