‘Shame On You!’: Sharpton Guest Tears Into Juror B29 For Voting To Acquit Zimmerman 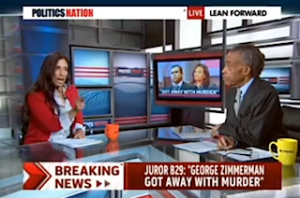 Al Sharpton hosted a panel on his MSNBC show Thursday evening to discuss the recent revelations from Juror B29, also known as “Maddy,” who came out today and said she believes George Zimmerman “got away with murder” but “can’t get away from God.” After viewing the clip of Maddy, Sharpton’s guest Seema Iyer, exclaimed, “Shame on you!” at the young woman who ultimately voted to acquit Zimmerman.

“Maddy, shame on you!” Iyer yelled, waving her finger at the camera. “How dare you invoke God and the lord to us God-fearing people when the law was there, the evidence was on your side. Reverend Al, shame on her.”

“Maybe she didn’t understand the law,” Sharpton disagreed, not wanting to heap blame on the juror. “You act as though she is a lawyer.”

Criminal defense lawyer Ken Padowitz also rejected Iyer’s point, saying, “This is our system of justice. It’s not shame on the juror. She was a juror in this case, and we need to respect the verdict.” He added, “It’s not a failure of this juror, it’s a failure of the law. The law is confusing.”

“If we respect the verdict,” Iyer shot back, “then we don’t change the law and we remain as compliant as everyone else.”

“I don’t blame her for not understanding something that was not explained. And I differ with those who say you can respect the verdict but not also change the law. You respect that they made a decision on the law the way it is. But I think the way the law is needs to be changed and clarified.”