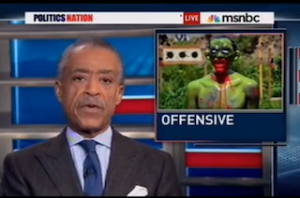 MSNBC’s Al Sharpton went off on Zombie Industries Monday evening for displaying a life-size target that bears a striking resemblance to President Obama at this past weekend’s NRA convention in Houston, Texas. The NRA did eventually ask the company to remove the figure, nicknamed “Rocky,” from its booth, but it is still for sale, for $89.95, on their website.

Sharpton called the target a “stunning, offensive display from the far right” and linked it to part of a larger campaign to paint the president as “un-American,” which he dubbed the “Right-Wing Horror Picture Show.” The host pointed to the fervor over the Satan character on The History Channel’s The Bible that many conservatives said resembled Obama and past remarks by new NRA president Jim Porter about our “fake president” as additional examples.

He added that this type of rhetoric “has no place in a civil debate but it was literally on center stage at the NRA convention this weekend.” Sharpton was joined by former Pennsylvania governor Ed Rendell and radio host Joe Madison, who joined in the outrage against the anti-Obama sentiments on display at the NRA convention.

Of Zombie Industries and their semi-apology, Madison said, “they are a sorry bunch of people that I can’t use words for, but I do take offense and I think anyone else, black, white or any other color, would take offense at this.” He added that if the NRA keeps talking as they have been, they are “going to lose not only this generation” but the next generation, because nobody in their right mind wants to be identified with this.”

Rendell agreed, calling the display “truly ugly” and saying, “if the Republican party doesn’t divorce itself from this really quickly, they will be true zombies. They will be the walking dead.” Looking forward to the next elections, he added, “the NRA is out of touch with it is own members and it’s turning off the American people and when the Republicans align themselves with the NRA, they are signing their death warrant for 2016 for sure and maybe 2014.”

While Rendell said these displays from the NRA can help Democrats politically, Madison warned that these images and ideas seen by the wrong person could have devastating consequences. “All it takes is one fool, one spark and we’ve got a major problem in this country and we need to avoid it.”