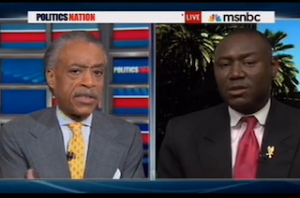 MSNBC’s Al Sharpton followed up on his interview with George Zimmerman‘s attorney Thursday by speaking with the lawyer for the family of the teenager Zimmerman is accused of killing: Trayvon Martin. Sharpton and the attorney Benjamin Crump zeroed in on the question of whether Zimmerman continued to “pursue” Martin after a 911 dispatcher told him not to.

After listening audio from Zimmerman’s 911 call and a police interview, Crump said, “I think you just illustrated with these series of actual confessions from George Zimmerman about his pursuit of Trayvon Martin, the story keeps changing. And we have to remember Trayvon Martin isn’t here to tell his story. So, what George Zimmerman says has to be vetted very carefully, because an unarmed kid has been killed.”

“We have to remember, credibility is the issue,” Crump continued, outlining how Zimmerman has “already had credibility issues with the court” regarding his attempts to stay out of jail leading up to next week’s trial. Regarding the issue of Zimmerman actively pursuing Martin, Crump argued that you can clearly hear on the audio tape that he was doing just that.

Sharpton also asked him about audio tapes that appear to reveal Martin yelling for help. “It is very troubling for George Zimmerman’s defense because, my god, if Trayvon Martin is yelling for help and he shoots him in the heart anyway, that’s not second-degree murder, that’s first-degree murder.”

“When you really think about it in the totality of circumstances,” Crump said, summing up the case, “George Zimmerman as this neighborhood watch patrol volunteer going around the neighborhood with a gun on prescription medication is every parent’s worse nightmare, because god help you if he comes up to your teenage child and says ‘what are you doing around here’ and your teenager doesn’t answer the question right. Then you have a Trayvon Martin situation at your doorstep. And we can’t have that in a law-abiding society.”