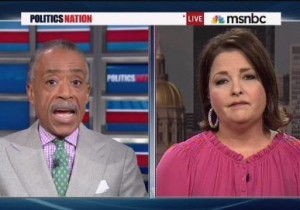 For the second time in two days, Al Sharpton battled a conservative on Obamacare and the threat of a government shutdown. Tea Party Express chair Amy Kremer argued that Democrats are the ones who want to shut the government down, but Sharpton didn’t buy it, saying at some point, conservatives need to accept Obamacare is the law of the land and stop trying to take it down.

Kremer argued that even Democrats have said the health care law is “not ready for primetime,” so the goal right now is just to delay. Sharpton went through all the steps of the law being upheld, from Congress approving it to the Supreme Court upholding it to Mitt Romney losing on a platform of repealing it, concluding, “You lost, it’s the law!”

Kremer shot back that Democrats used a “parliamentary trick” to pass it in the first place, while Sharpton brought up all the Republicans who are starting to sour on the defunding idea. Kremer was a lot more bullish, saying the very fact House leadership brought it to the floor is a victory, and citing several red-state Senate Democrats she believes might end up joining the GOP.

Towards the end of the debate, Sharpton pressed Kremer to say that if the Senate rejects the House bill, Congress can go ahead and fund the government without the Obamacare defunding provision. Kremer hedged, insisting the Republicans have no interest in shutting down the government.