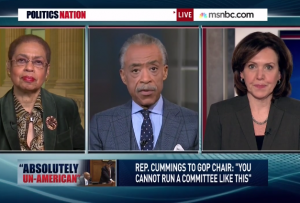 During the big IRS hearing on Wednesday, House Oversight Committee member Elijah Cummings let loose on Chairman Darrell Issa, calling the proceedings “absolutely un-Americans” and one-sided, as Issa tried to wrap up the hearing and shut off Cummings’ mic. Afterwards, Issa accused Cummings of “slandering” him, but on MSNBC, Congresswoman Eleanor Holmes Norton told Al Sharpton that Cummings was right.

Cummings said later he was trying to determine if they could get a “proffer” from Lois Lerner‘s attorney so they could find out what she really knows, and Norton was very curious why Issa would suddenly want to “keep us from revealing that we could have learned exactly what she would have said.” She said, “He wanted to do a show, a show in violation of every ethical norm.”

Walsh, meanwhile, was stunned at how adamant Issa was about shutting Cummings down every step of the way. She told Sharpton, “This was thuggishness. I’ve never seen anything that thuggish… Who treats another congressman like that.” Norton added, “This was a show, it was an abuse of power, and it defeated his purpose.”

Walsh also took on Issa for “selectively” leaking information, specifically to Fox News, because “he treats Fox News like it’s a fourth branch of government to help him prosecute this case when there’s absolutely no basis.”