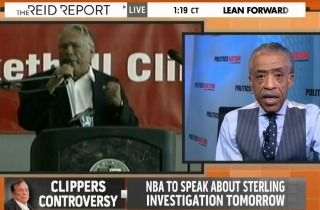 MSNBC host Rev. Al Sharpton appeared on his colleague Joy Reid’s program on Monday to discuss his plan of action for addressing racist comments allegedly made by Los Angeles Clippers owner Donald Sterling. He suggested that, should there be a failure to act, the NBA should move to “disband” the entire Clippers franchise and replace it with another team in the wake of Sterling’s scandalous remarks.

“I certainly think the NBA is going to be a target if they don’t move,” Sharpton said. “We understand they’re going to make a statement tomorrow.”

“Certainly, the NBA must make it clear that they are not excusing or validating this kind of behavior,” he continued. “And anything short of that would be unacceptable.

“The NBA ought to say that we would disband and have another team there,” the MSNBC host continued. “[Earvin] ‘Magic’ Johnson said he would put up money to do a new team, or buy that team. But you cannot have the NBA says it’s permissible to act like this.”

Sharpton said that he knew “what to do” if the NBA does not comply with his recommendation. “We start with the pocket, and we’re going to continue moving forward,” he concluded.

Earlier on Monday, Sharpton threatened to organize a boycott of the Clippers franchise if the NBA did not move to suspend Sterling.