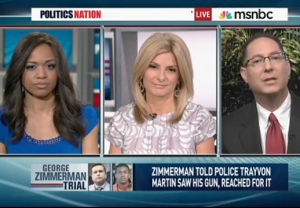 One particular detail of the George Zimmerman murder trial that Al Sharpton brought up today was how Trayvon Martin supposedly grabbed for Zimmerman’s gun. But Sharpton and his panelists pointed out that Zimmerman had a concealed weapon and it was dark out, which led them all to raise the skeptical eyebrow to ZImmerman’s story. One of Sharpton’s guests said that there’s absolutely no way Martin would have been able to see, let alone grab for, Zimmerman’s gun, unless he had x-ray vision.

RELATED: Sharpton: If Zimmerman Was In An ‘MMA Attack’ With Martin, ‘Why Didn’t He Use His MMA Training?’

Lisa Bloom explained that Zimmerman’s internal holster is held inside and in the back of the pants, and considering that Zimmerman had a shirt and a jacket over it, it doesn’t add up that Martin would have been able to grab for the gun if he was on top of Zimmerman and Zimmerman was on his back.

“How on earth, then, did Trayvon Martin see the gun–which, I might add, is a black holster, the gun itself is black, it’s a very dark night and raining, according to all of the witnesses. Unless Trayvon Martin had x-ray vision, the story doesn’t really make a lot of sense.”

Ken Padowitz declared that this is a fact that the “credibility lemmings” cannot refute, adding that the whole point of concealed carry is that the weapon is concealed. And Padowitz went one step further, to say that this can now be used to “call everything George Zimmerman says into question.” Sharpton brought up how Zimmerman previously demonstrated that the gun was in the back, but in court today, his attorney mimed the gun being in the front.

Faith Jenkins said that Zimmerman provided the “perfect justification” for someone trying to prove they killed someone out of self-defense. Sharpton added that Zimmerman’s claim also sounds undermined with the consideration that Martin’s DNA was not found on the gun. Bloom maintained that it would have been very “awkward” had Martin tried to grab for the gun, and so “the story doesn’t really add up.”

Padowitz predicted that the jurors would use their “common sense” and realize that there are too many holes in Zimmerman’s story, and if that’s the case, they will come back with a guilty verdict.