Sharpton: ‘Real Bosses of the GOP’ (Beck, Limbaugh, Hannity) to Blame for Shutdown 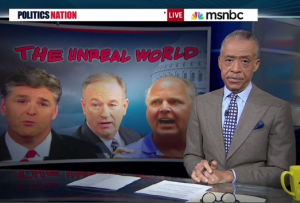 Al Sharpton noticed on Thursday that many of the Republican talking points on the government shutdown have been lifted directly from the mouths of conservative media pundits, blaming the “real bosses of the GOP” for the shutdown. Who are these bosses, you ask? Glenn Beck, Rush Limbaugh, and Sean Hannity, as well as other conservatives in the media pressuring the GOP to keep the fight going.

Sharpton ran through a list of “wacky ideas” from the GOP, including Michele Bachmann‘s comments about impeaching “dictator” President Obama, and showed how people like Beck, Limbaugh, and Mark Levin have also been pushing these same ideas. He could only come to this conclusion.

“The right-wing media calls the shots! So if you want to know who’s really to blame for the shutdown, it’s the real bosses of the GOP!”

Former Democratic congressman Tom Perriello pointed out that, thankfully, the Republicans’ “devastating poll numbers” empower the moderates and “reasonable” Republicans who have been fighting all along against this big shutdown catastrophe. Sharpton noted how at this weekend’s Values Voters Summit, Beck and Levin will be sharing the stage with people like Bachmann and Ted Cruz.

Goldie Taylor said, “With these kinds of values, you’ve got to wonder who these people really are.” She said the “silent majority” of moderate Republicans need to stand up to the “bullies” and “purge their party of some of these very extremist voices.”