Sharpton Talks ‘Cultural Disconnect’ With Jeantel: I ‘Understood’ That’s ‘Just The Way Some Of Y’all Talk’ 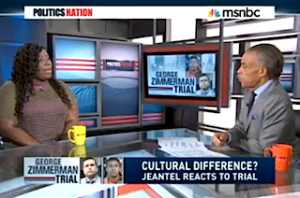 Jeantel responded to her critics, saying, “People who are attacking me, they’re not in my place. They got to imagine if that was them, my age, would they do it? The whole world watching you. So, nobody felt how I felt.” She questioned “people over the whole world” can judge he when “the person who shot Trayvon did not even testify.” She said of Zimmerman, “That’s not a real man. If you were not guilty, you’ll come up and tell your story.”

Sharpton asked Jeantel about the “cultural disconnect” between her and many of the people who watched her testify on TV, noting that he didn’t have any trouble understanding her when she spoke. “You know, I’ve always been against young folks, including my daughters, using the ‘n- word’ and ‘cracka,’ although I used it when I was younger,” he said. “But we understood that wasn’t trying to make a race statement, that’s just the way some of y’all talk, though we kind of tell y’all not to.”

Jeantel said that teenagers use those words with other teenagers, but not with their parents. Either way, she said, “that don’t have nothing to do with the case.” She added that the characterization by the media of Martin was “disrespectful to him and his parents. That’s the victim. He died. He didn’t ask for that.”