‘She Went There’: Sanford Pretends Not To Hear Colbert-Busch’s Dig About His Affair During SC Debate 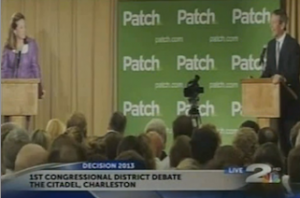 For all those watching the South Carolina congressional debate Monday evening between Republican Mark Sanford and his Democratic opponent Elizabeth Colbert-Busch, one major question hung over the proceedings. Would anyone bring up the former governor’s extra-marital affair with an Argentinian woman that most people thought would bring his political career to an end? As one moderator said after Colbert-Busch confronted Sanford about the scandal: “She went there.”

While answering a question about the sequestration cuts, Colbert-Busch said, “when we talk about fiscal spending and we talk about protecting the taxpayers, it doesn’t mean you take that money we saved and leave the country for a personal purpose.” The comment, referring to Sanford’s euphemistic hike down the Appalachian Trail that actually turned out to be a trip to Argentina, drew a healthy mixture of cheers and boos from the crowd in attendance. When Sanford resisted the urge to jump in with a response, one of the moderators said, “She went there, Governor Sanford.”

“I couldn’t hear what she said,” Sanford replied, drawing huge laughs from the audience thinking he may be deflecting the issue with a joke. When the laughter died down, he stuck with his story, saying, “Can you repeat it? I didn’t hear it, I’m sorry.”

Whether he actually didn’t hear Colbert-Busch’s comment, which seems unlikely, or this was his way of not confronting the issue, his tactic seemed to work as his opponent didn’t press him to discuss the affair or the public funds he spent, and later reimbursed. Instead, he returned to the initial question at hand, saying, “I’ll go back to sequester. Here’s the problem with sequester, which is, I think it’s a real problem to not be specific on spending cuts…” Sanford even managed to work in dig at his favorite mock debate partner House Minority Leader Nancy Pelosi. But he had nothing to say about the affair.