Shellie Sterling to Barbara Walters: ‘I’m Fighting for My 50%’ of Clippers
VIDEO

Shellie Sterling to Barbara Walters: ‘I’m Fighting for My 50%’ of Clippers 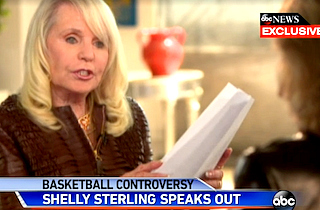 Los Angeles Clippers owner Shellie Sterling told ABC News’ Barbara Walters she intended to fight the NBA if the league attempted to force her husband to sell the Los Angeles Clippers, and also said she was filing for divorce from her husband, whom she suspects might have the beginnings of dementia.

“I’m fighting for my fifty percent,” Sterling said. “I’ve been with the team for thirty-three years, through the good times and the bad times. It’s my past time and I love it.”

RELATED: Donald Sterling Opens Up to Anderson Cooper: ‘I’m Not a Racist’

Sterling told Walters she didn’t think her husband was a racist, and that as she had never heard him say anything like what was recorded on a phone call to his mistress V. Stiviano, she worried for his mental health.

“I have never heard him say racial things,” she said. “It was horrible when I heard it. It was just degrading, and it made me sick to hear it. But I don’t think he’s a racist.” Sterling held up divorce papers during the interview, though ABC News noted she had not filed them yet.

According to NBA spokesperson Mike Bass, Sterling may not have an option to keep the team if the league dropkicks her husband out of it. “Under the NBA Constitution, if a controlling owner’s interest is terminated by a 3/4 vote, all other team owners’ interests are automatically terminated as well,” he said. “It doesn’t matter whether the owners are related as is the case here. These are the rules to which all NBA owners agreed to as a condition of owning their team.”