Shep Smith and Dana Perino Clash Over NSA Spying: ‘Is That How It Worked Under Bush?’ 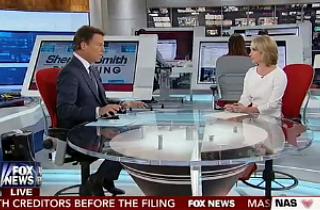 On Monday afternoon, Fox hosts Shepard Smith and Dana Perino duked it out this afternoon over revelations that the National Security Agency has surveilled allied leaders like German Chancellor Angela Merkel.

Reports indicate the international snooping began in 2002 under President George W. Bush and has continued until recently. As former Press Secretary under Bush, Perino told Smith: “I don’t get the outrage.”

“There’s a reason they call it top secret,” she added. “I bet you any of these countries that are in any of this news stores are trying to do the same thing to the United States of America. I don’t think we should cut off our options.”

Smith pressed the former Bush aide on whether monitoring the phone calls of world leaders is okay. “Fine with me,” she replied. As an outspoken civil libertarian, however, Smith pressed further.

“What would make us think it’s okay to listen into the phone calls of the leader of Germany?” he asked.

“What would make us think it’s not okay?” Perino curtly responded.

After Perino mentioned how she finds it implausible that President Obama was unaware of the Merkel snooping because of how presidents tend to be briefed with such classified information before meeting with world leaders, Smith challenged her to talk about her own former boss’ snooping activities: “Did President Bush know?” he asked.

After the two had a feisty exchange over the relevance of the president’s claims to have not been fully aware of the overseas snooping, Perino told Smith “You seem depressed.”

“I am,” he replied. “Why wouldn’t I be? The government spies on everything illegally.”

“I have known for months now they would read our e-mails anytime they want,” the host said. “They’re taking in our phone information and use it when they want. We have a Constitution here, and whether it’s illegal or not, it doesn’t look constitutional to Judge [Andrew] Napolitano… I don’t know if Americans want us to spy on everyone around the world and make more enemies. I don’t know.”

“Maybe they don’t want to know,” Perino answered, “but that’s why things are kept top-secret. If these countries had the ability to top into President Obama’s Blackberry, they would do it in a second. I hope they can’t, which is why we should keep our secrets close.”

“Is that not how it worked under the Bush administration?” Smith asked, referring to the reports that NSA officials simply didn’t notify the president of the extent of the surveillance. “If they did something they didn’t want the president to know about, they just gave certain information?'”

After dodging an answer at first, Perino relented: “I don’t think so.” She also asserted that snooping on leaders like Angela Merkel is “not illegal.”

“I don’t what is legal or illegal,” Smith responded. “It’s just very weird, don’t you think?”

“I don’t think it’s that big a deal,” the former Bush spokeswoman said.