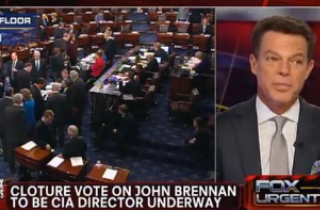 Less than 24 hours after Senator Rand Paul‘s filibuster of John Brennan‘s appointment to the CIA over to White House’s policy on droning American citizens, Judge Napolitano and Fox News anchor Shepard Smith railed against the controversial policy saying that even the discussion of its legality was “the craziest thing in the world.”

Shortly after speaking with a Fox News reporter on Capitol Hill, Smith brought Napolitano, a Fox News libertarian contributor, onto his show to get his take on the president’s drone policy. Napolitano explained to Smith that this fight began when the Bob Mueller, the head of the FBI couldn’t explain if an American could be killed by a drone on American soil. Mueller said that they should “ask the White House” according to Napolitano.

Napolitano proceeded to walk Smith through the mixed messages administration officials provided on the question of whether or not the president has the authority to kill Americans on American soil without trial, specifically with a drone.

“There’s many a slip between the cup and the lip,” the judge said explaining the confusing response on this.

Smith suggested that all the confusion on what the actual official drone policy is has created a ripe breeding ground for conspiracy theorists to charge the administration with all kinds of things. He then went on to trash the growing surveillance culture in America.

“It’s bad enough that they’re putting the things up watching us. It’s bad enough they have cameras on every corner, and stopping us, you know, if your car runs a redlight. Now all we’re sure of is if I’m engaged in combat – unless I am – they can’t kill me while I am sitting at the cafe down the street. I’m not sure they can’t look in my window,” Smith said.

The judge then explained the case of Anwar al-Awlaki and his 16 year-old that were both American citizens and killed by drones without any trial. Smith expressed outrage over an incident where former Obama press secretary Robert Gibbs was pressed on this at the 2012 presidential debates he said that al-Awlaki should have had a more responsible father.

“Now you understand why this question came about. If a government thinks it can do this and speak glibly about it and they can do it because he was in Yemen, can they do it he is in Greenwich Village.

Smith noted it’s a slippery slope and said “If we have to ask this question even then we’ve gone so far beyond what that document has to say then we really need some mirror work.”

Watch below, clip via FOX