Shep Smith And Judge Napolitano Rail Against NSA Abuse: ‘We’re Not Letting This Go. Not For One Moment!’
video

Shep Smith And Judge Napolitano Rail Against NSA Abuse: ‘We’re Not Letting This Go. Not For One Moment!’ 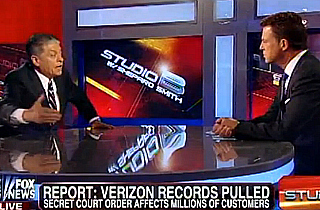 Once again showing his civil libertarian side, Fox News anchor Shep Smith railed against the National Security Agency this afternoon with the help of noted libertarian colleague Judge Andrew Napolitano.

Reacting to last evening’s news that the NSA has secretly obtained the phone records of millions of Verizon customers, most of whom are not suspected of any crimes, and Sen. Harry Reid‘s (D-NV) assertion that congressmen have known about the snooping for seven years and is “routine,” Smith and Napolitano tore into the “constitutionally impermissible” nature of the government’s actions.

“This is a fishing expedition on the grandest scale we’ve ever seen in American history,” Napolitano said. “They’re looking for a select group of people and in order to find that select group of people the Constitution says to present some evidence against them to a judge and get a search warrant for their phones. Rather than doing that, they got a search warrant for 113 million phones.”

“Who would trust them after this?” the judge continued, noting that the administration’s defenders have claimed the NSA hasn’t actually listened to anyone’s calls. “The Constitution doesn’t trust them.”

Smith then played a clip from this morning of Sen. Lindsey Graham (R-SC) saying he is “glad” the NSA is snooping in order to protect Americans from terrorists threats, prompting the judge’s response:

“The whole purpose of the Fourth Amendment is to prevent the government from doing this, to prevent it from interfering with the privacy rights of a lot of innocent people in order to find a few that may be planning something wrong. […] Nobody wants the wrong thing to happen but the idea that we would sacrifice liberty in order to obtain safety is a canard. This is just a shortcut to make it easier for American spies to spy on Americans.”

He concluded: “This is the most extraordinarily broad search warrant every issued in the history of the federal courts of the United States.”

A clearly-incensed Shep Smith then spoke directly to camera: “Under this logic, the government can send to people to all of our homes, put them in a bed next to us, have them watch everything.”