“How Do They Sleep?” Shep Smith Blasts Congress Over 9/11 First Responders Bill 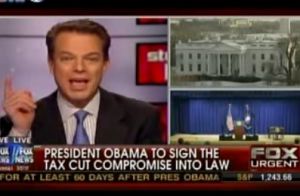 Discussing the amount of money on “tax cuts for billionaires who don’t need them,” Smith railed against the very same lawmakers who somehow couldn’t get relief passed for 9/11 first responders.

How do they sleep at night after this vote on Ground Zero first responders from 9/11? Are they going to get that done, or are we going to leave these American heroes out there to twist in the wind?

Wallace, who agreed more should be done for the first responders–some of whom appeared Thursday night on Jon Stewart‘s Daily Show in a much-discussed segment skewering Republicans for refusing to support the 9/11 bill.

Shep took Stewart’s lead and ran with it:

Smith and Wallace never named names Friday afternoon, but did rip the “political” failure. “Who’s going to hold these people’s feet to the fire? We’re able to put a 52 story building so far down there at Ground Zero, we’re able to pay for tax cuts for billionaires who don’t need them and it’s not going to stimulate the economy. But we can’t give health care to Ground Zero first responders who ran right into the fire? Went down there to save people? Do people know what this city was like that day? People were walking over bridges they were covered in ash they were running for their lives they were crying their family members were dead. And these people ran to Ground Zero to save people’s lives. And we’re not going to even give them medicine for the illnesses they got down there? It’s disgusting, it’s a national disgrace, it’s a shame and everybody who voted against should have to stand up and account for himself or herself.