Shep Smith Calls Out Sen. Coburn Over His Threat To Block 9/11 First-Responders Bill 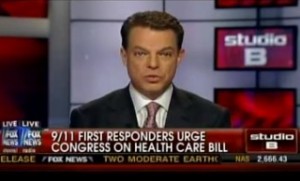 Except for maybe Jon Stewart, no one else has been out ahead of the 9/11 First-Responders Bill story as Fox News Shepard Smith. Last Friday, after The Daily Show dedicated most of the previous night’s program to the oddly controversial bill, Smith piled on, asking how congressional members who have held up the bill providing health care to emergency relief workers on 9/11 “sleep at night.” Yesterday he called out ever single GOP lawmaker by name who turned down a request to join him on his show. Today? It was Senator Tom Coburn who drew Shep’s ire.

What did Coburn do to tick Shep off? Well despite mounting pressure from both parties and media pundits alike, Oklahoma Republican Sen. Tom Coburn announced on Monday his intentions to block passage of the legislation. Writing for CBS News, Lucy Madison reports:

(Coburn) tells Politico that he “wouldn’t allow the bill to move quickly” due to “problems with parts of the bill and the process Democrats are employing” to pass it.

Coburn defended his position in a Tuesday morning interview on Fox News, arguing that “this is a bill that’s been drawn up and forced through Congress at the end of the year on a basis to solve a problem that we didn’t have time to solve and we didn’t get done.”

Coburn also argued that the bill, entitled the Zadroga 9/11 Health and Compensation Act, was a rush bill that “hasn’t even been through a committee.” (That appears to be incorrect: ThinkProgress notes that on June 29, the Senate Committee on Health, Education, Labor and Pensions – on which Coburn sits – held a hearing on the bill.)

After reporting on the day’s news of the story, Smith called out Senator Coburn, holding him up as an example and barely hiding for his disgust of how this story has unfolded. Watch the clip from Fox News’ Studio B below: