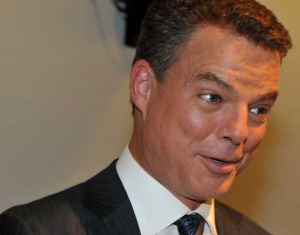 Fox News anchor Shepard Smith says it’s insulting for outgoing New York Times executive editor Bill Keller to call Fox’s “Fair and Balanced” slogan “cynical,” as he did back in March. In an interview at the New York Press Club, Smith was asked about those comments. “I don’t enjoy being insulted by people who talk in generalities,” Smith said to journalist Rich Lamb. “My guess is that the people on his opinion page don’t get that kind of broad and sweeping review.”

Smith compared the range of talent at Fox News, from hardworking journalists to brash opinion hosts, to the same collection of talent at the Times:

“My guess is that the people on his opinion page don’t get that kind of broad and sweeping review. He has some very outspoken people on that page, and they are respected. And we have some outspoken opinion people, and he chooses to paint all of us with the same brush. We have journalists just like he does. And I’ve worked very hard my whole life to try to remain exactly that. I did it when I worked for CBS and I did it when I worked for ABC [stations he worked at in Florida prior to FNC] and I’m doing it now. And, if someday I’m doing it for somebody else, I’ll do it there. Journalists know what we do. We find out about things. We give them context and perspective and we report on them. That’s all I’ve ever wanted to do in 25 years in this business. That’s all I’m ever going to do. That’s all Roger Ailes wants me to do. And I hope that’s what Bill Keller wants out of his journalists, just like Roger Ailes wants out of his. It’s not nice.“

Watch it here, from the New York Press Club: