Shep Smith: Congress Put Us Through This ‘Kabuki Theater’ For Nothing 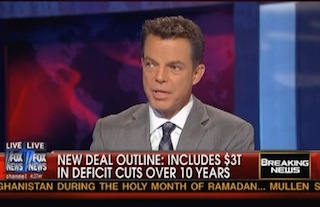 Now that an agreement appears to have been reached between both the White House and the congressional GOP on the debt crisis, the immediate focus for many in the media is to analyze the supposed agreement, and in classic over-simplified terms, declare “winners and losers” even if any such assessment is an over-simplified and cynical attempt look for eyeballs. But honest analysis is a rare and important facet in our political landscape, and to hear Fox News’ Shepard Smith reaction, there is a clear loser in this debt crisis deal: the American people.

Smith had on as guest WSJ’s John Bussey and both seemed less than ecstatic with the supposed agreement struck earlier today. Shep put it in stark terms saying:

We do have two problems — you know both sides would like to say its only one problem but there are two: one is spending, one is revenue. So you gotta cut spending and raise revenue in one way or another to make the numbers work here and there’s not a single bill out there that does that, none of it fits those needs, it doesn’t deal with any long term entitlement program problems; we still have the exact same disastrous situation prior to any bill that might get signed after it’s done and they put us through kabuki theater to lay out nothing. Stop it.

Bussey demurred to Smith’s harsh critique but did point out correctly that there are now things on the table that hadn’t been before. But Smith kept at it, expressing frustration that the only thing that Congress appears to have achieved in the last week is the naming of a post office in Peoria.